HAVE A WONDERFUL FESTIVAL OF LIGHTS!

So we hope you’ll all find something on this page, HAPPY BROWSING, NEW EXPERIENCES, WONDERFUL HOLIDAYS!

THE two MIRACLES OF Chanukah that we celebrate today:

The stunning military victory by the Hasmoneans led by Judah Macabee and his 4 brothers (Maccabim) over the Syrian Greeks and King Antiochus IV in 164 BCE.

According to Rabbinic tradition (Talmud Tractate Shabbat 21b), when they went to re-dedicate the Temple, they found one cruse of oil bearing the seal of the High Priest Yochanan. The oil was sufficient to light for one day but it miraculously lasted for eight.

Chanukah is one of the few Jewish holidays not mentioned in the Bible (hint, another is Purim!). The story of how Chanukah came to be is contained in the book of Maccabees 1 and 2, which are not part of the Jewish canon of the Hebrew Bible. The Talmud in tractate Shabbat also gives us some insight into the history and nature of Chanukah, including laws around rituals that we practice like the lighting of the Chanukiah.

The events that inspired the Chanukah holiday took place during a particularly turbulent phase of Jewish history. Around 200 B.C.E, Judea, also known as the Land of Israel came under the rule of Antiochus III, the Seleucid king of Syria. At the beginning of his reign he was favorably disposed toward the Jews and accorded them some privileges. His son, Antiochus IV, proved less favorable, ancient sources recount that he outlawed the Jewish religion and ordered the Jews to worship Greek Gods. At the same time, the influence of the Hellenists (people who accepted idol-worship and the Greek way of life) was increasing. Yochanan, the High Priest at the time, tried to do all he could to push back on the Syrian-Greek influence. This led to internal strife between him and the Jewish Hellinists.

Some modern historians suggest that this internal strife between those who had assimilated into the dominant culture that surrounded them, and those who were determined to impose Jewish laws and traditions is at the core of the Chanukah story. The traditionalists won out in the end, with the Hasmonean dynasty gaining control of the land of Israel and maintaining an independent Jewish kingdom for over a century.

Antiochus IV had enacted a series of harsh decrees against the Jews which eventually led to forcing them to serve Pagan gods. In 168 B.C.E, his soldiers entered Jerusalem, massacring thousands of people and desecrating the Second Temple. Mattityahu and his 5 sons, led by Judah who was known as the Macabee, a word composed of the initial letters of the four Hebrew words Mi Kamocha Ba’eilim Hashem, “Who is like You, O G‑d” led a revolt that lasted for 3 years. They eventually overcame Antiochus and his army and were able to liberate the city of Jerusalem. Later when they went to re-dedicate the Temple, they found one cruse of oil bearing the seal of the High Priest Yochanan. The oil was sufficient to light for one day but it miraculously lasted for eight. Shortly thereafter the Rabbis established the 8 day holiday of Chanukah to commemorate these two miracles and to celebrate the continuation of Jewish religious life which had been challenged both internally and externally.

The dreidel game (or Sevivon in modern Hebrew) is one of the most famous Chanukah traditions. It has its origins from various similar games called “Tops” where one would spin something and based on the outcome, you would take or put money into a central pot. During Greek King Antiochus IV’s rule Jews were forbidden from keeping Shabbat and Jewish holidays, ordered to eat non-kosher food, expected to worship Greek idols, and were banned from teaching or studying the Torah. Some historians believe that children played these types of games to trick the authorities into thinking that they were not studying about Judaism but rather playing games.

Today we play as a way to celebrate a rich history and have fun with friends and family!

WHAT IS A DREIDEL / SEVIVON?

A Dreidel is a 4 sided top with 4 Hebrew letters on it. What are the Hebrew letters and what do they stand for? Nun (נ) / Gimmel (ג) / Hey (ה) / Shin (ש) (Outside of Israel) / Pey (פ) (In Israel). What do the Hebrew letters on the four sides of a dreidel stand for? Answer: The letters nun, gimel, heh, and shin represent the saying, “Nes Gadol Haya Sham,” meaning “a great miracle happened there.” In Israel, Shin is replaced Pey to change the phrase to  “Nes Gadol Haya Po,” meaning “a great miracle happened here.”

HOW TO PLAY DREIDEL?

Shin: put one more token in the pot
Nun: do nothing
Gimmel: take all tokens from the pot
Hey: take half of all tokens lying in the pot. In case of an odd number of tokens, round up.

Check out these two articles that give you some historical perspectives on the game of Dreidel / Sevivon:

It is customary to eat oily foods during the week of Chanukah. The main reason for this is to remind us of the miracle of Chanukah when the oil lasted for 8 days. Some of the classic oily foods people eat are latkes (potato pancakes) and Sufganiyot (Jelly donuts). We encourage you to try making at least latkes at home for your family.

HOW TO LIGHT THE CANDLES

For 8 days of the holiday you will need at least 1 Menorah and 44 candles.

* Even if you do not have a Chanukah Menorah at home, you can make one yourself by just lining up tea lights or lining up candles in a straight order. Remember to distinguish the Shamash (the middle candle that lights the others). All you need are enough candles / tea lights for that specific night.

Place the Chanukah Menorah at the door, opposite the mezuzah OR in the front window.

Publicizing the miracle—Pirsum HaNes
We are supposed to publicize the miracles of Chanukah, which is why we should light the candles in a window, ideally at a time of day when people are still passing by. In Israel, people even have the custom to light the candles outside. There is no other Jewish ritual that requires us to publicize something to the outside world. Why do you think that is the case with lighting the Chanukah candles? What is it about the nature of this holiday that is so important that we must publicize it? See reflection question #8 below for further discussion.

Candles should burn for at least 30 minutes.

In many families, all members of the household, including children, light their own Menorahs.

It is forbidden to light a fire on Shabbat, which extends from sunset on Friday evening until nightfall on Saturday night. Therefore, on Friday evening, Dec. 3, the Chanukah lights should be kindled early, before the Shabbat lights, which are lit 18 minutes before sundown.

From the time the Shabbat candles are lit (Friday evening) until Shabbat ends (after nightfall Saturday night) and until the havdalah prayer (separating Shabbat from the weekday) is recited, the Chanukah menorah should not be relit, moved or prepared.

Chanukah lights for Saturday night are kindled only after Shabbat ends after nightfall. 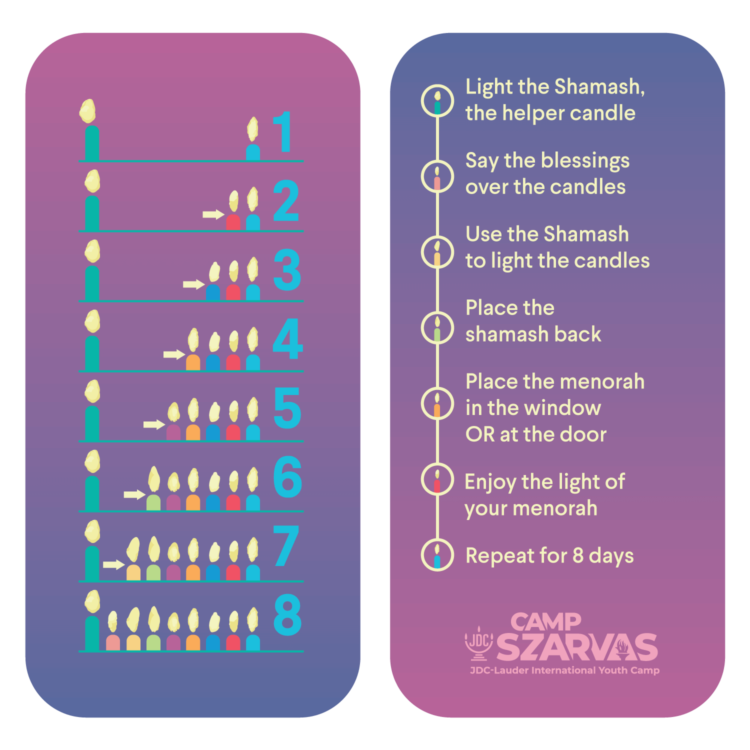 BLESSINGS TO RECITE BEFORE LIGHTING THE MENORAH

On the first night of Chanukah (Sunday, November 28, 2021), recite all three blessings. On all subsequent nights, recite blessings number 1 and 2.

Blessed are you, Our God, Ruler of the Universe, who makes us holy through Your commandments, and commands us to light the Hanukkah lights.

Blessed are you, Our God, Ruler of the Universe, who performed miracles for our ancestors in their days at this season.

Blessed are you, Our God, Ruler of the Universe, for giving us life, for sustaining us, and for enabling us to reach this season.

After we light the candles it is customary to sing two songs:

We kindle these lights [to commemorate] the saving acts, miracles and wonders which You have performed for our forefathers, in those days at this time, through Your holy priests. Throughout the eight days of Chanukah, these lights are sacred, and we are not permitted to make use of them, but only to look at them, in order to offer thanks and praise to Your great Name for Your miracles, for Your wonders and for Your salvations. 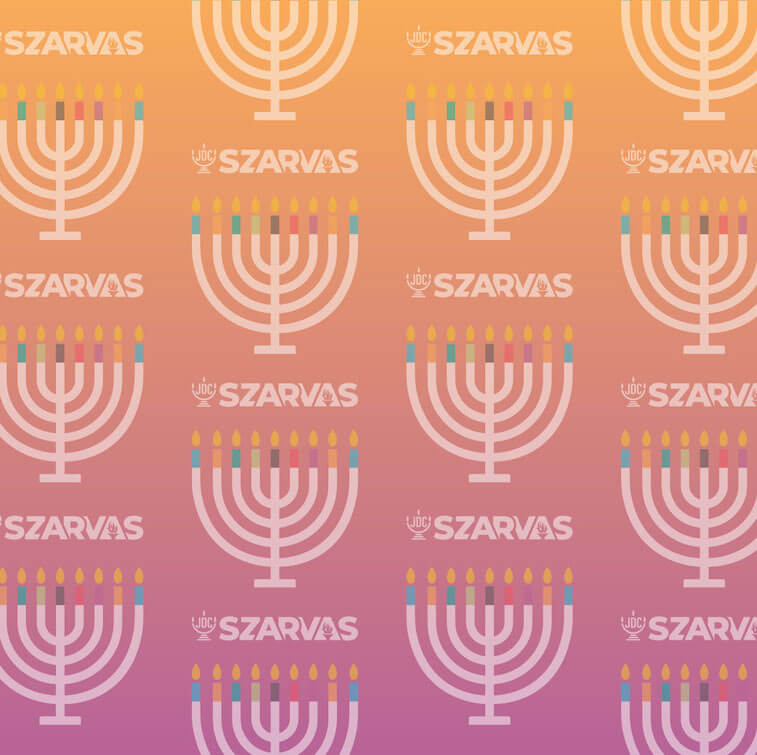 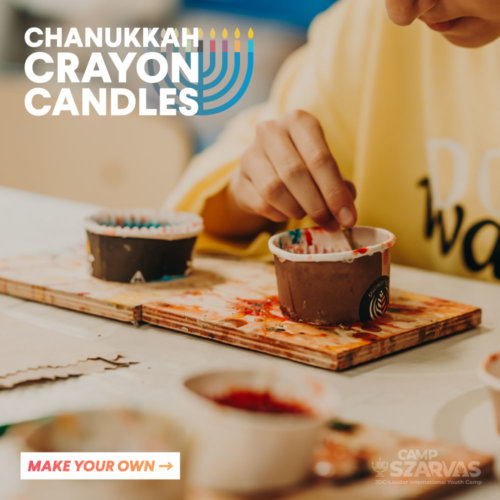 We encourage you to ask yourself these questions during Chanukah and discuss it with those you are lighting the candles with each night.

FOLLOW THE SAFETY GUIDELINES FOR A HEALTHY AND HAPPY CHANUKAH!